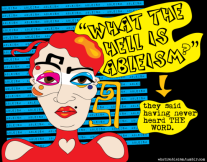 On Friday I attended Ableism in Academia, a one-day conference held at UCL, a day aiming to give a space for neurodiverse, disabled and chronically ill academics (and their abled allies) space to discuss ableism in the academy as well as developing a manifesto for change:

Academia prides itself on productivity, innovation and rigour. It also purports to promote inclusivity and diversity. However, as disabled and chronically ill academics know, ableism is endemic in academia. Rather than embracing difference as a reflection of wider society, academic ecosystems seek to normalise and homogenise ways of working and of being a scholar.

Against this background, this interactive symposium provides a forum to discuss the pressures and challenges faced by disabled, chronically ill, and neurodiverse academics. By engaging in debate around academic ableism, including how it intersects with gender, race, class, age, and sexuality, we aim to create a manifesto that will challenge academia’s existing notions of able-bodied perfection and provide impetus for change.

From the conference moodle (click here for login details)

As the organisers noted in an article for Times Higher Education, this was a heavily oversubscribed conference, which reflects both the passionate level of interest in the themes discussed during the day, but also, I think, the real need many delegates feel to have a space like this made for them in an often inaccessible, inhospitable academy.  Many expressed relief over being in a space that actively welcomed and included us, either on location or via the captioned livestream. From home, Dr Claudia Gillberg tweeted: “I’m on my bed, feeling the same, then again, today is different, at least for a brief moment’s respite owing to a live stream of this great, uplifting initiative, and renewed hope for change. It’s out in the open, at long last”, while PhD student Gill Loomes noted: “Was so liberating being (feeling?) able to do what I needed to do to manage my posture – neck cushions, blankets etc and not feel subjected to the ‘able gaze’ – a delightful experience!”

I and others tweeted quite busily during the conference so I’m not going to rehash what was said there – and if you want to watch some or all of the day’s proceedings unfolding, you can do so at the conference moodle where there’s an impressive seven hours of captioned video! I thought I would instead just note down a few reflections on the day as a whole.

I attended this conference for a couple of reasons. Firstly because I have had a number of chronic health issues, some over the long term, and last year – as you know! – my health problems were particularly acute. This has made me perhaps more actively receptive to considering questions of ableism – by which I mean not just passively and vaguely agreeing that “oh, yes, there’s ableism in the academy, someone should put a stop to that” but instead pushing me toward thinking about how I as an individual may contribute to structural inequalities and what I can do to counter that. Secondly and more broadly, if I am committed to being an intersectional feminist academic then understanding ableism and lifting up the voices of my disabled, neurodiverse and chronically ill colleagues and siblings-in-arms is essential, and I think that even the most woke feminists often replicate ableist norms, since they are so deeply embedded in our society. As Prof Fiona Kumari Campbell argues, ableism is a “network of beliefs, processes and practices that produces a particular kind of self and body…that is projected as the perfect, species-typical and therefore essential and fully human”. It underpins many of the racist, sexist, classist assumptions of patriarchy, and so it could perhaps be argued that ableism is foundational to oppressive hegemonies. During sessions I tried to keep a fairly low profile, aside from making a comment at the final question session about precarity intersecting with disability. This was largely because as an abled person who doesn’t work in disability studies, I was there to listen and learn rather than make space for myself in the conversation!

As Dr Jason Davies noted during his emotive and moving talk, the ableism of the academy works against everyone. Something that came up several times over the course of the day is that being “abled” is a process and one that is never fully realised, and that as a set of criteria for being “fully human” everyone is bound to fall short. Several people also mentioned the recent strikes and how draining they had been, and it struck me that though this industrial action has brought to the fore many of the structural inequalities of academia (for instance for academics in precarious employment), it has still not often emphasised the ultimately ableist foundations of much of the everyday business of being an academic. AiA helped me realise just how much more accommodating, welcoming and relaxing a conference space could be than they often are, for instance. I am currently relatively healthy, but it was still refreshing to be in a room where people were actively encouraged to get up and move around if they needed to, or take a break in the nicely set up quiet room – and how much more valuable that would have been to me while I was on blood thinners and suffering from the side effect of painfully aching joints, or from the fog of fatigue that my pulmonary embolism and my recovery from it left me in. Or knowing that no one would comment if I nipped to the loo multiple times – still something I have to do sometimes, and in the six months after I gave birth and left with chronic recurring cystitis was a problem that left me constantly aware of just how far away I was at any time from a toilet. It was wonderful to know that there were so many food options available that were tasty for everyone and yet were dairy free, gluten free, vegan etc. I am fortunate not to have any food intolerances but I promise you that I didn’t feel like I was being sold short of “real food” when I got brought a hot lunch right to my seat (another really great way of treating everyone with parity, rather than for instance having everyone queue up and forcing anyone who required assistance to have to ask for it and be singled out).

Of course AiA was not perfectly accessible. Natalya Dell wrote a useful blog post on why the live-captioning of the conference was of suboptimal quality, and how organisers might in future improve that. On intersectional lines, I noticed that the conference line up was very white, and I know that ableism can disproportionately discriminate against people of colour. Hopefully future events will be able to uplift more BME voices. And I’m sure there were other points where access and equality could be improved. All that said, though, this was undoubtedly the most inclusive academic event I have attended and it has made me think much more carefully about how events I might arrange could also be more radically inclusive spaces. It also makes me reflect that such events are only possible with committed institutional support; very few academic events I’ve arranged have had the kind of funding that make, for instance, providing BSL interpreters or live-captioning particularly feasible. So we all need to press our institutions and funding bodies to make accessibility to academic events (and more broadly, of course) not about “reasonable accommodations” but rather about access rights. AiA did a great job getting these conversations started, but it should be on all of us to keep them going.