I thonke yow herteley of all kyndenes that ye have done to me before this tyme.

On a warm day in May 2011, I boarded a train from Oxford to London. I was at this time living in Paris, and I clutched in my hand my cheap French mobile phone, just in case it rang. Just in case.

Shortly after five pm, it did. A soft, measured voice offered me a three year position as lecturer in medieval history  at the University of Oxford. Outside, the Oxfordshire countryside rolled by in a haze of gold light. I accepted with thanks, and when I hung up I burst into tears that had to be explained to the passengers sitting opposite me.

Yesterday, to celebrate the retirement of eminent scholar Christopher Wickham, several dozen historians gathered in the auditorium of St John’s College, Oxford, to reflect on his career. Several historians, who had been variously Chris’s students, colleagues and friends, spoke about his influence both on their work and on the wider historical community.

Professor Christopher Wickham, Chichele Professor of Medieval History, expert in social and economic Italian history from the end of the Roman Empire to around 1300, doesn’t seem like an obvious person for me to name as a significant influence on my career. After all, I work largely on the fifteenth century, and I suppose my research could be called “literary history” for the sake of brevity. But as I listened to a host of people talk about Chris’s extraordinary list of accomplishments, I thought about his kindness to me as an early career scholar, and that for me at least this rates as highly as an academic talent as fluency in multiple languages or the writing of pathbreaking books.

It was Chris, of course, who offered me the job at Oxford. Yesterday I thanked him for his words at our first meeting after I got that job. As a refreshing change from a number of well-meaning people who asked whether I’d done my “DPhil here or at Cambridge”, Chris had no assumptions that Oxford was the only place to be, or even the best place. He told me that I didn’t owe anyone anything, and if I could get a permanent job somewhere else, I should just go, without looking back. Sensible words, you’ll agree – though not necessarily what you’d expect from someone who was at the time Head of Faculty in one of the world’s most prestigious history departments. As someone who’d never done more than visit Oxford as a tourist, and who while confident she could do the job at hand was a little intimidated by the, well, Oxfordishness of it all, this was a comforting start to my new role.

In some ways it doesn’t take a great deal to be kind to other scholars, particularly if you are in a position of power. It is easy to scatter crumbs of consolation to more junior colleagues, to offer a few words that lift their spirits. But in other ways, that is being kind in only the most superficial manner. Perhaps it is merely being nice. We can, I think, often define “kindness” as merely something like “demonstrating good will”. But in Middle English, kindenesse means – amongst other things – kind deeds. I have met many senior scholars who demonstrate good will to their juniors: who will be welcoming of their presence, grateful for their contributions, and will write an encouraging word in their leaving cards at the end of yet another fixed-term contract. Senior scholars who will do kindness for their junior colleagues are rarer.

So I remember that first proper conversation I had with Chris as him doing me a kindness. I would have been entirely satisfied back then if he had simply made me welcome, seemed friendly, and offered me a few words of advice on how to do my job and how the faculty worked: in short, if he had been nice. He did all those things; but he also reminded me that I was worth more than a fixed-term contribution to the university. In the years since then, Chris has read my work, supported numerous job applications – including the Leverhulme I currently have – and never failed to make me feel as if I matter as both a scholar and a colleague.

At yesterday’s colloquium the shadow of Brexit loomed large. How could it not, when several speakers came from EU countries, and Chris’s own work is celebrated for its transnational scope? The afternoon was a celebration of Chris’s achievements, but it was also an opportunity to reflect on the ways the boundaries of “medieval history” have changed in the last forty years, mostly for the good – thresholds between sub-disciplines, periods and regions becoming more malleable and easier to cross. At a time when 15% of academic staff and 4.5% of undergraduates in the UK come from EU countries, universities are understandably anxious about the impact closing our borders might have on their intellectual culture and, more pragmatically, on their finances. It doesn’t help that the referendum campaign has been one of the ugliest in recent political memory, as British anxieties about the economy, public services and a nebulous “future” have become twisted into a knot of xenophobic parochialism. We are looking inward, and we are eating our young. 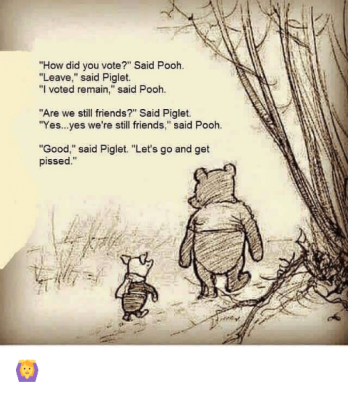 If there were ever a time for academics to be kind, it is now. I am not calling for niceness, as that insipid meme of Winnie the Pooh and Piglet reconfirming their friendship after the referendum asks us. There is nothing particularly courageous in being nice, and indeed if it encourages us to sublimate our principles, niceness can be cowardly. Kindness, however, does require bravery; it requires us to love our friends and colleagues with an active affection, one that defends them from cruelty and promotes their interests. In a world where we may be seeing even less academic funding, where more pressure is put on departments, where fewer jobs are available and where it may be harder to meet residency requirements, people will be victims of unkindness. They will be taken advantage of, pushed to do more work than they can bear and told to feel grateful for it; they may also suffer even more than they already do on racist and sexist grounds. It will be easy to be nice to them – to smile at them in the corridor, to have lunch with them, to commiserate over a heavy marking load – and these will be good things to do. But it will be harder to be kind – to step in where we see injustices, to speak up for each other, to make the time to find out how someone is really doing and what we can do to make it better. It will be especially hard if we are victims of unkindness ourselves. And yet it is crucial that we do kindness in our institutions: our activism begins with an outstretched hand.

10 thoughts on “Academic Kindness: Chris Wickham, Europe, and who we want to be now”