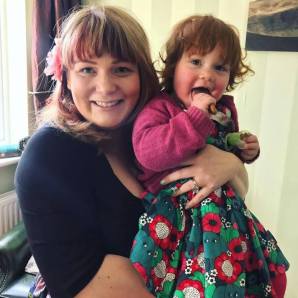 Here in the UK, yesterday was Mother’s Day (or as it’s more traditionally known, Mothering Sunday). It was my second as a parent, my first as a mother who is back at work full time (last year I was on maternity leave), and it was a wonderful day with my family. I am aware that I am very hashtag-blessed! to have a healthy child, a supportive spouse and that we are both in paid employment. With friends in quite different situations, I am always aware that it could quite easily be otherwise.

Mothering Sunday is generally a day of celebration that is understood in heteronormative terms – advertising campaigns for gift products frame it as a “day off” for mums, while their comically hapless husbands help their adorable white children prepare cute treats. It is not ordinarily a time of deep reflection on the work that mothers (understood capaciously) do. I thought it was interesting that the day coincided in the twitterverse with a great deal of interest over the weekend in Bruce Holsinger’s #thanksfortyping hashtag. What Bruce has done is highlight the acknowledgment within academic texts of wives who typed their husbands’ manuscripts. As Claire Bourne put it, it’s a record of “the invisible labor of women in the textual transmission of men’s scholarship”. After all,  asks Charlotte Riley, “How much typo-catching, prose-wrestling, syntax-tidying, argument-clarifying is hidden in the word ‘typing’“? Very few of these wives are named; when they are, they certainly don’t get a co-author credit, even if their own husbands acknowledge they deserve one.

Most of these acknowledgments are from books several decades old, though I’ve seen a few more recent ones. With the advent of PCs, most people don’t require a typist (or to learn the more difficult art of typing on a typewriter rather than a computer keyboard). But the point remains that academia still carries the legacy of being an industry that functions on the basis of assuming that the male academic has a wife who either does not work outside the home or if she does, she has subordinated her career to his. It’s a legacy with wider implications, for instance in the fact that women academics tend to end up with a larger administrative burden than men – they become involved in more committees, may have more pastoral duties that result in more paperwork, and even may simply be expected to take minutes at meetings when men are rarely asked to do so.

I’ve seen quite a few tweets that have suggested ways that women can avoid these burdens. I’m not going to link to them, because they are by and large written by women who have had to confront enormous gendered expectations in their own work and have done their best to overcome them; I’ve got no interest in piling in on them, not when there are still so many men in our industry who wouldn’t think anything amiss about #thanksfortyping at all. But as I’ve said before on this blog, I don’t like “lean in” approaches to combating gender inequality in academia – or in any industry, really. Leaning in is generally about mimicking dominant behaviours and modes of work. It requires for instance, dressing “professionally” (when “professional dress” is a heavily gendered and racialised mess of a concept), being “assertive” (the same issues apply), etc. Let’s be honest – it’s also, too, about “delegating” “less important” work to someone else. I have often argued that while it is a major problem that academic women are more frequently burdened with administrative work than men, an even bigger problem is that such work – while often vital for promotion etc – is undervalued. Similarly, domestic labour is disproportionately done by women rather than men, and I regularly see advice for working women to get an ironing service or a cleaner to free up their time, or articles encouraging men to contribute to the housework by suggesting they’re more likely to have more sex if they play a part in their household. (Yes, really.)

These approaches don’t really face two essential issues. Firstly, in any kind of job (including parenthood, which despite not being compensated financially and operating around the clock, certainly is labour!), there is fun, stimulating, prestigious stuff – and there are plenty of monotonous, by-rote tasks that must be done.

Secondly, the routine tasks may be easy and boring to do, but they are not just the things you endure or pass off to someone else so you can get to the good stuff; they, too, are an essential part of what make the creative, stimulating elements of the job possible. Here’s a parenthood example: when my daughter was very young, it was almost impossible for her to nap if she was not in motion. This is apparently a feature of some infants (not one I approve of, frankly). I used to walk for literally miles and hours to get her to sleep. Even if it was pouring with rain, or icy cold, or I had period cramps . This could be hard, frustrating work. But if she didn’t sleep, I wouldn’t have the rewarding parts of parenting an infant – smiles, seeing her learn something new, knowing she felt happy and safe. That is, I did it not just because the alternative was a screaming mess of a baby, but also because it was good for her, and it was good for me too.

Last year I wrote: “My gut feeling is that there need to be concrete, specific changes made within the academy to help level the playing field further: but that also we need to consistently, insistently protest against the appearance of the playing field. Maybe we’re making it easier to get into, but it still stays much the same old playing field even if the players have changed.” A radical response to #thanksfortyping isn’t working out how to circumvent the “grunt work” of academia. It certainly should be about ensuring the even distribution of administrative labour between members of a department (which doesn’t necessarily mean everyone gets an equal-sized piece of the pie; this must be a distribution based on other workload factors, too). But even more importantly, it should be about recognising the value of this kind of work as an essential element of academic industry, of compensating it appropriately, of not denigrating the work of support workers, of taking it seriously in job applications rather than just thinking about REF2020 outputs. Too many mothers receive a bunch of flowers on mother’s day and little support throughout the rest of the year; many women academics might if they’re lucky get thanked for once again agreeing to be the token female on a panel but don’t get any recognition that such work impacts on their research time, or have that taken into account when promotion comes around. And too many academics, women as well as men, don’t fully respect the work of often incredibly overstretched, underpaid administrators (very often women) in their own departments, who are usually easing their burdens in ways that go unremarked. Thanks for typing, indeed.

2 thoughts on “Thanks for typing: Rewarding labour?”