Googling the word “saracens”, the first three pages of results are mostly about sports teams. So when I saw this story about anti-Muslim hate crime in Cumbernauld, Scotland, I was struck by the accompanying photo of the graffiti. 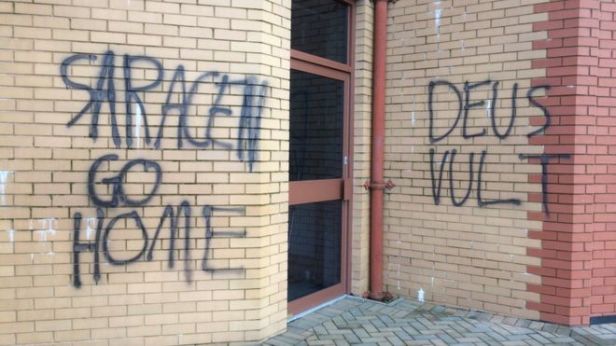 While “Saracen” has for centuries been used as a term to identify Arab and Muslim peoples, the ever-reliable OED places it in frequency band 4 for usage – which means it’s not a terribly rare word, but that it’s not a word that’s likely to be heard or seen very often, either. Its most recent sample usage is dated to 1905. That, alongside the Latin Deus vult (God wills it), immediately made me think of the early use of the term “Saracen” – the context of the Crusades.

To passe over the grete See To werre and sle the Sarazin.

In 1095, according to the chronicler Robert of Rheims, Pope Urban II’s call for crusade were met with the cry “Deus vult”. It may seem rather strange to see the rhetoric of the eleventh century replicated in spray paint in modern Britain. However, as the scholar Jonathan Lyons has noted, anti-Islamic discourses in the modern world, which “operate silently in the background as they shape our statements about Islam and the Muslims”, originate with the Crusades, categorising Muslims as “irretrievably outside the bounds of civilized society, reduced in status to little more than animals,” obliterating the many different cultures, languages and customs of the quarter of the world’s population into one violent, hateful, uncivilised stereotype: the Saracen.

About 230 years after Pope Urban II’s call to crusade, someone composed the English language romance The King of Tars. Here is John Chandler’s summary of the storyline:

The Christian king of an eastern land named Tars has a beautiful wife and an even more beautiful daughter. The sultan of nearby Damas hears tales of the princess’s beauty and demands her hand in marriage. The king of Tars refuses, as the sultan is not Christian, and a war ensues. The king of Tars quickly finds himself losing the war, and the princess offers to wed the sultan to end the bloodshed. After some convincing, the king and queen accede to her request, and the sultan takes the princess to Damas. Despite the princess’s beauty, the sultan refuses to wed her until she converts to Islam. That night, the princess has a dream reassuring her that everything will turn out for the best if she does not stop believing in her heart in the power of Christianity. The princess pretends to convert and is wed to the sultan. She quickly becomes pregnant, and when the child is born, it is a formless lump of flesh. Recognizing the misshapen child as a sign of spiritual or religious conflict, the sultan rightly accuses the princess of false conversion, and she responds by proposing a test of faith. Each of the parents is to prove the power of his or her religion by praying that the lump-child be given form. The sultan places the lump on his altar and prays but to no avail. The princess asks that a priest be freed from the sultan’s prison and bids him baptize the lump. Upon baptism, the lump-child gains human form, and the sultan recognizes the power of Christianity: he himself converts. When the sultan is baptized, the power of his new faith is made apparent by a change of his skin from black to white. The sultan then joins forces with the king of Tars; he asks his people to convert to Christianity, and if they do not, he executes them. The poem ends with another battle, wherein the Christian sultan of Damas and king of Tars fight five Saracen kings. The Christians are victorious, and the principals, we are told, live a happy life and are accepted into Heaven.

In this romance, the product of a Christian-Muslim marriage is a child that is no child: it is a formless, lumpen thing that cannot really be classed as human.

For lim no hadde it non,
Bot as a rond of flesche yschore
In chaumber it lay hem bifore
Withouten blod and bon.
For sorwe the levedi wald dye,
For it hadde noither nose no eye
Bot lay ded as the ston.

In this story, baptism does more than save the child’s soul; it provides the very breath of life that converts the useless flesh into a pretty human baby named John. The sultan is delighted to see his new child, but the princess says that unless he is christened, the sultan cannot be considered part of their Christian family:

“Bot thou were cristned so it is —
Thou no hast no part theron ywis,
Noither of the child ne of me.”

There is no longer any part of the Saracen in the child, whose father is God. Only by being baptised can the sultan once again become his father.

The Cristen prest hight Cleophas;
He cleped the soudan of Damas
After his owhen name.
His hide that blac and lothely was
Al white bicom thurth Godes gras
And clere withouten blame.

Just as the lump-child’s past self is obliterated by baptism, the sultan loses not only his name, but also his colour. Through God’s grace, he is white – and “without blame”. His body was black like sin, and now it is pale and good.

That Islamophobia was also tied to racism, even if racial categories were different in the past than today, is clear in this narrative. The foreign body becomes a foreign body, like a mote of dust in the eye: an irritation that must be washed out before it becomes an infection.

Several hundred years later, many indignant white people insist that “all lives matter”. But as the defiled walls of a Scottish mosque make clear, (perceived as) black bodies are lumps waiting for excision from an imagined white body politic, not human flesh and blood.

Today I popped into my local Muslim bakery, which sells amazing cakes and also hot curry baguettes. Hot curry baguettes for lunch for £2.50! A pleasant lady in hijab sold it to me, and admired my sequinned jumper, which has a huge robin stitched onto it. “It’s nice for the festive season,” she said. I agreed. The war on Christmas certainly doesn’t start here in Birmingham, with any of these good people I’m glad to call my neighbours. I’m pretty sure the Christ Child, born as a refugee to an unmarried couple, wouldn’t think any of them are formless lumps.

Hark! The herald-angels sing
Glory to the newborn king;
Peace on earth and mercy mild,
God and sinners reconciled.

Merry Christmas, to those of you who celebrate: and to everyone – peace of the season, and good wishes for the next year to come.