Right now, after the success of #adviceforyoungjournalists, the hashtag #adviceforyoungacademics has sprung up. I took a screenshot of the first few tweets that came under top results for the tag. 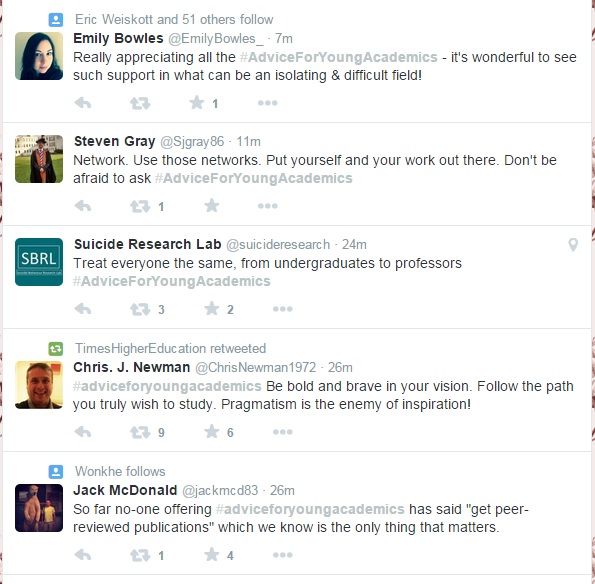 It’s funny, though not unexpected, that only a handful of tweets run the gamut from solidarity to inspirational to cynical. That reflects our diverse and always-opinionated community. It also reflects the difficulty of talking to a group of people who are varied in age, location, domestic and economic situations and field of research. I raised the point that “young” academics is misleading – while “young” could refer to the job, I don’t think many people talk about being in a “young” stage of their career, do they? It’s a minor point, but perhaps an important one, when much advice for early career academics seems tailored to the late-twentysomething single, childless, recent PhD graduate. I have many friends and colleagues who finished their PhDs much later in life, or took career breaks because of family. And even those of us who graduated in our twenties often spend many years in the jobs associated with postdoctoral, pre-permanent/tenured posts – short term teaching posts, fixed contract postdocs.

Some of those jobs are marginal, unstable, and poorly paid. Others are comfortably salaried and prestigious. I was an ECR when I was working two teaching jobs and an office job, barely making rent; I was an ECR at a prestigious university in Paris, earning a much more reliable wage and doing research for a group project – though I was still only just making my rent; I was an ECR when I had a three-year contract at Oxford, undertaking all the responsibilities of a lecturer in a full-time teaching and research post; I am an ECR now that I have a three-year grant from a prestigious organisation to undertake research, with a bit of teaching on the side. The life I lead now – having just bought a house with my husband, earning a decent wage, paying into a pension – is very far removed from five years ago, when I would lie awake at night, thinking about how to make my money stretch enough to last me over the holidays when there was no teaching work, and wondering if I would ever find an academic job with an actual title.

So in some ways, maybe I would seem like a good person to give advice to my fellow ECRs – after all, I’ve managed to occupy multiple types of early career experiences! But there was no plan to this circuitous career route. I simply applied for things as they came up, and took what I got. And I don’t know your circumstances, or needs, or experience. I try these days to only give advice if it is requested, and if I know something about the person asking for that advice. Otherwise it’s all too easy to spout platitudes.

Instead, here are a few things that I have learned over the past half-decade since I finished my PhD.

My greatest vice is procrastination. I would be a better academic (and person, probably) if I learned to kick that habit. I have applied for many, many jobs I never expected to get – and in most of those cases, I didn’t. That hurts less than the jobs I thought I had a real shot at, and also didn’t get. I took a job in Paris when I spoke almost no French and had no money in the bank, and it was one of the hardest things I have ever done. But it made me grow in all sorts of ways – few of which were related to the actual job I was doing there. I am glad I took the risk, and I’m also glad I came back to England when I did: to a job that suited my skills better, and that allowed me to build a home with my partner. I should have published more, and earlier; but I’m also glad I prioritised my mental and physical health. I am still afraid of failure, and the goalposts of that failure have changed with every success. Every milestone makes me raise the bar higher, and sometimes it can be hard to take stock of what I have achieved. I am trying to get better at that. I want to be kind to myself, in the same way I want to extend grace to colleagues and students. I think that some of the best teaching work I have done has not been in the classroom, but in conversations in my office, in hallways, over dinner, when students have laughed and asked questions and sometimes cried. (There’s one single piece of advice, then: keep a box of Kleenex handy.) I am still goddamn useless at sorting my bloody paperwork, and I still don’t read as much as I should, or as widely. In a lot of ways I am probably not the academic I imagined I would be, back when I first dreamed of becoming one: and despite not being a high-flying superstar, in most ways I think that may be for the best.

2 thoughts on “On not giving #adviceforyoungacademics: notes from the ECR frontline”