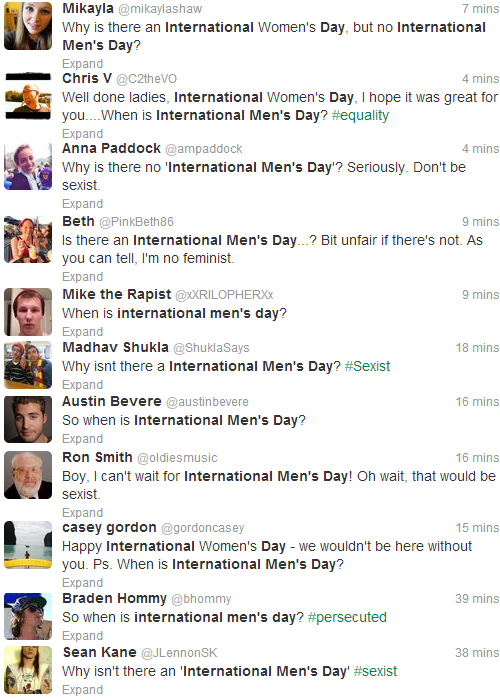 On the 8th of March each year, International Women’s Day – a day originally established by socialists way back in the early twentieth century in order to both celebrate women’s achievements and to promote the cause of equality, particularly universal suffrage – provokes its usual twitterstorm of apparently-persecuted men (and their female allies) who wonder when International Men’s Day is.

Well, gentlemen, fear not. It’s today. While in its most current form, it’s only been around for about the last decade, it actually has a history dating back half a century; for example, in 1968, the journalist John Harris wrote that the Soviet-established Women’s Day: “makes much of the equal rights it has given the sexes, but as it turns out, the women are much more equal than the men.” John Harris would probably have been retweeted by a lot by the people pictured above, and I’m sure would also have wondered why Americans needed a Black History Month.

As a researcher in the history of masculinities, you would be forgiven for assuming I’d be a natural supporter of IMD. In my book on fatherhood, after all, I argue that it is vital to study both constructions of masculinity and male experience precisely because patriarchal culture makes men and masculinities the touchstones for ‘normal’ behaviours and standards within society: maleness is taken for granted, creating the paradox of simultaneously privileging men and making their gender status invisible. The work I do is actually on some of the more privileged people in late medieval society, which is a deliberate choice. The establishment and reinforcement of hegemonic norms results in social power; who creates, maintains, and polices those norms is of interest to me – as is the impact those expectations have on those in power. That is: how do medieval men maintain the structural privileges of patriarchy, and how are they affected by them?

Try putting all that on a bumper sticker. It’s all very worthy, but it doesn’t exactly translate into wanting to celebrate male power, so already IMD presents a problem. Why does it exist? IWD was established because women, collectively, were and are a group that are less privileged than men. 130 million women worldwide are subjected to genital mutilation; 14 million underage girls per year are forced into marriage; in the UK women earn on average 15% less than men. There’s no need to labour the point further. While many women are exceptionally successful, women categorically across the board are subject to more sexual violence than men, earn less money than men, and have historically had far fewer legal rights than men. IWD functions as a way of marking these inequalities and injustices, celebrating women’s successes, and campaigning for equality.

So if we’re going to have International Men’s Day, it would make sense that people focus on issues that affect men specifically because they are men, right? For instance: the extraordinary social value of hypermasculinity (defined in part by heterosexuality, physical prowess, economic capability and stoicism) that means men who have a feminine gender presentation, are homo- or bisexual, transgender and disabled are subject to discrimination and even persecution, and that contributes to the high suicide rate amongst economically-vulnerable and socially-disadvantaged men. Or the racial element of patriarchal culture that represents black men as animalistic and Asian men as effeminate. These are areas worth talking about men’s gendered experience as they intersect with race, socio-economic status and sexual identity, right?

Here is the image that is used to promote International Men’s Day. 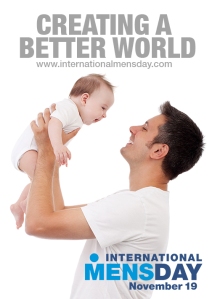 That the promotional image is of a father is not especially surprising, given that the latest iteration of IMD is promoted by the Dads4Kids movement. In and of itself it’s not particularly problematic, though if I were founding an International Men’s Day I might think about using an image that wasn’t quite so lily-white, and not relegating men of colour to a group shot on the About page. But the text that follows it, that establishes the agenda of IMD, is troubling.

“Objectives of International Men’s Day include a focus on men’s and boy’s health, improving gender relations, promoting gender equality, and highlighting positive male role models.” That all sounds great! Men are statistically more vulnerable to a number of diseases because men are much less likely to seek early assistance from medical professionals. And men acting as allies to women – that’s awesome. Women need men to work for gender equality, too. However:

The ability to sacrifice your needs on behalf of others is fundamental to manhood, as is honour.

“Honour” and “sacrifice” as essential to “manhood”? This is all getting a bit World War I up in here. Then:

International Men’s Day is an opportunity for people everywhere of goodwill to appreciate and celebrate the men in their lives and the contribution they make to society for the greater good of all.

There we go. That is the crux of IMD. It is “an occasion for men to celebrate their achievements and contributions, in particular their contributions to community, family, marriage, and child care while highlighting the discrimination against them.” What that discrimination against them is, however, goes unexplained. IMD is not worried about why black men are murdered by the police, or gay and trans men are attacked on the streets and denied jobs; why adolescent gay and trans males are at high risk of homelessness; why working-class men are a high risk group for suicide. Their donation page does not raise money for, for instance, the male victims of domestic violence that MRAs constantly bring up as a way of shutting up dialogue about violence against women. Instead it is for funding Dads4Kids, a charity whose dubious function is to “turn the tide of fatherlessness”. I have no quibble at all with their stated aim: “to improve the well-being of children by increasing the proportion of children growing up with involved, responsible, committed and loving fathers”. Fathers have a key role in childhood development, and I am all for promoting active, involved parenting by fathers. But I do think it is misleading for a group supposedly promoting IMD to use it as a way of funding work that, as far as I can tell, is primarily intended for heterosexual men and nuclear families – categories not all men, and definitely not all men who are in at-risk groups, are a part of.

In short: IMD could serve as a force for good, if it was used to support marginalised men. But of course, when people say “not all men!” inresponse to feminist critiques, they are very rarely thinking about men who are subject to social exclusion, discrimination and economic hardship. Instead the kind of men who hashtag #persecuted about the mere existence of International Women’s Day are those who think it is feminists who create structural inequalities, and that Gamergate really is about ethics in games journalism.

8 thoughts on “BUT WHAT ABOUT THE MEN?!: International Men’s Day & Researching Masculinities”